How to get simply more power on the 23cm band? After building (read spending time) or buying (read spending money) the 23cm transverter you end-up with the qrp equipment and after making the initial qso-s with the nearby (read 400-500km) stations the appetites are bigger and bigger. Most of the todays transverter are not exceeding the 27dbm of output power and some way of increasing the power is required. Using the old style technique with the chain of low gain transistors is not cheap and simple process. At the end the price of used trimmer capacitors is exceeding the price of semiconductors used in the project! Investing (read spending more money) in the Mitsubishi RA18H1213G power module can be the good value for the money. 100mW input power delivering 20w of output power for only 65$  is what you get (according to some already built projects). 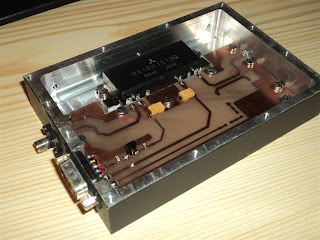 The sample used in my project comes from old ATV transmitter with note written on the plastic bag: 50mW IN - 11W OUT. Module was in continuous 24/7 operation for a couple of years where output power dropped from 20W to 11W at the end. Removing the plastic cover, quick inspection using the magnifying glass showed that all bonding wires are looking OK, anyhow nothing can be done even if they are burned, chip with bonding wires is secured with some kind of hard transparent epoxy. So 11W or nothing .... Actually, the idea was to test this module despite the fact that many articles (clik link) speak about the oscillations that may occur and the way how to cure this problem. The amplifier was designed following the original data sheet using just the basic parts, nothing more - nothing less. 5V voltage regulator with blocking capacitors is also included with the output power indicator circuit at the end. 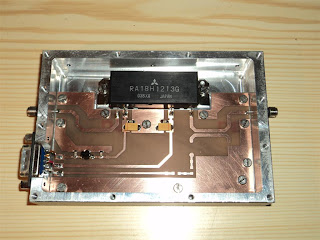 Old milled aluminum housing from the Comtek 900Mhz amplifier was a simple and easy to reuse for this project. Good RF shielding and grounding, adequate thermal contact with the hea tsink and a good quality SMA connectors was a plus. Already built SMA and power supply connectors dictate the component layout and the size of the PCB. For the PCB i choose the double side FR4 laminate 1mm thick to achieve tight connection with the central SMA input and output pins and 50 ohms PCB tracks. Input and output lines are 50ohm and there are enough grounding screws on the PCB preventing the self oscillation of the amplifier. Pay attention to the screws close to the SMA connectors, module input and output pins and grounding point for the capacitors that are blocking the power supply pins. 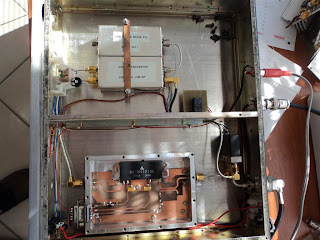 First test with 50mW drive gave 11W out. Further increase of drive power did not gave more power out, even 100mW of drive did not change nothing. The amplifier is very stable and no oscillation problem noted. The amplifier was than tested changing the drive power and power supply voltage to invoke some oscillations but the amplifier was always stable. With the 9V of power supply the output power was 7 watts, not bad at all. Probably, more power can be squeezed out with proper input and output circuit match but I was lazy to do that. Last test was done also with the parts in place that are measuring the output power. This power indicator can be very useful for monitoring the output where no extra SWR meter or power meter is required. The amplifier was tested in tandem with the latest AD6IW prototype low noise 23cm transverter with excellent results during the July 2011 uW activity contest from the portable location.
And yes, the latest AD6IW 23cm transverter is the state of the art ......
Posted by 9A4QV at 12:01 PM